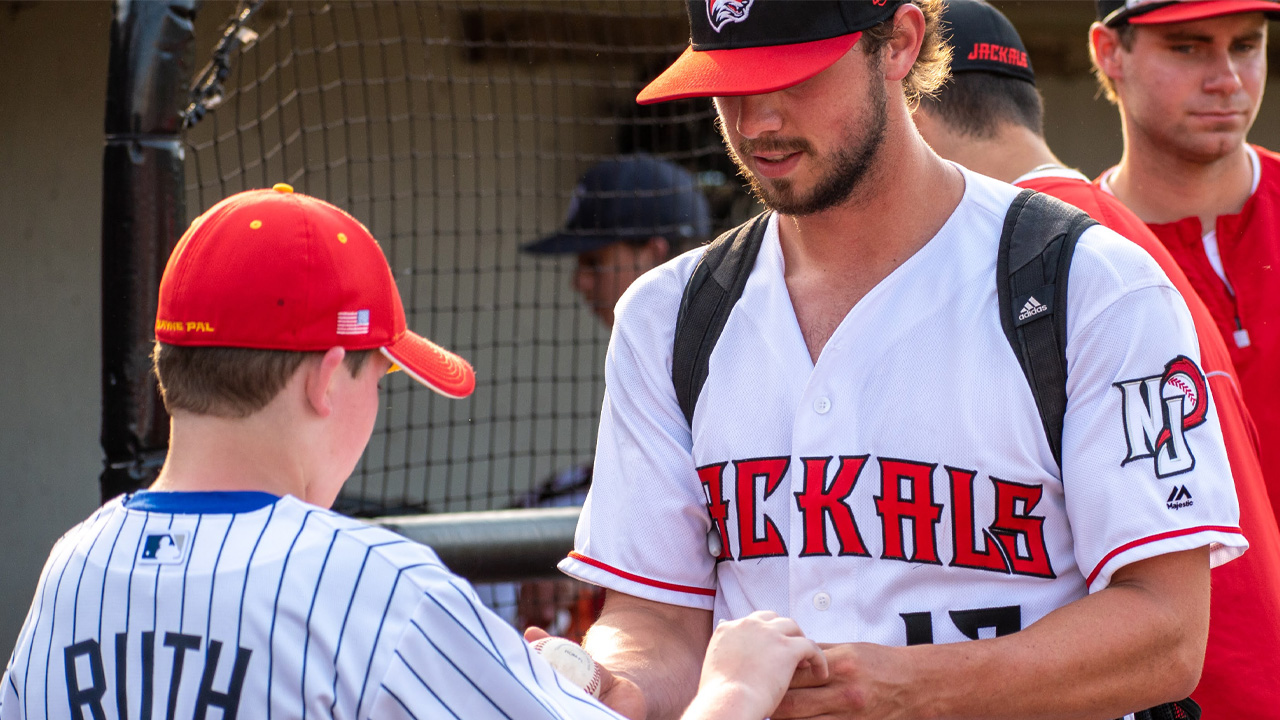 Posted at 11:54h in Jackals News by NJ Jackals
Share

Little Falls, NJ — August started off well for the New Jersey Jackals (34-34), taking their first two games of the new month against their oldest rivals in the Quebec Capitales (45-23). Thursday night served as an opportunity for the team to make history. Thanks to strong contributions both on the mound and at the plate, New Jersey took down the top team in the league 6-2, completing their first sweep of Quebec since May 30-June 1 of 2016.

The game started much like the prior two contests with the Capitales jumping out to an early lead, this time taking advantage of three Yasel Santana (1-1) walks, and an RBI by Kyle Crowl and Josh McAdams. Though once again sticking to the series script, the Jackals would go on to
tame Quebec’s bats for the remainder of the contest.

Throughout the three game set, the Capitales outscored New Jersey 7-0 in the first inning, with the advantage shifting to the Jackals 22-2 in innings two through nine. Additionally, Quebec failed to score after their initial trips to the plate in their last two games.

New Jersey relied on their star power early, taking a 3-2 lead thanks to a two-run home run by Dalton Combs in the bottom of the third, his twelfth of the season. He then added another RBI in the fifth to vault himself into the team lead and a three-way tie for third in the league with 64.

We’d be remiss if we neglected to talk about the Jackals’ arms. After a rough first inning, Santana silenced Pat Scalabrini’s lineup, eventually exiting the game with a line of two runs allowed on one hit, four walks, and six strikeouts in as many innings to earn his first victory as a
member Brooks Carey’s rotation.

Yasel was then followed up by Juan Perez, Thomas Bruss, and Jefry Valdez combining to toss three scoreless frames, while striking out five and allowing just two baserunners.

With the win, New Jersey advances to .500 on the season for the first time since July 23rd, raises their run differential to +11, takes a five to four season series advantage against Quebec and stay the course in what will be an exciting playoff race down the stretch of the final 27 games of the
season.

Both teams have northern bus rides of varying degrees of length over the next 24 hours, with the Capitales returning home to kick-off a three game series with their provincial rival, the Trois-Rivieres Aigles. Meanwhile the Jackals will head to Troy, NY for their final series against the Tri-City ValleyCats.

The Jackals will return home on Tuesday, August 9th against Empire State. Tickets are available at jackals.com!