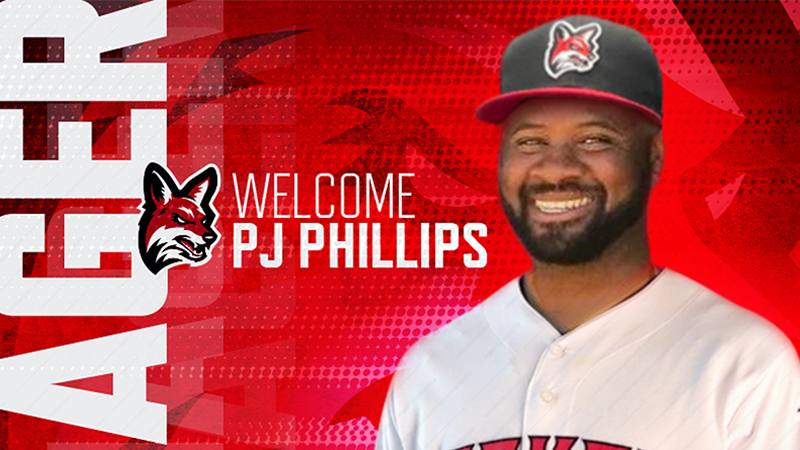 Posted at 15:13h in Jackals News by NJ Jackals
Share

There will be a very new look to the Jackals when they take the field at Hinchliffe Stadium for the 2023 baseball season.
The team’s 66-year-old manager, Brooks Carey, resigned in October. Now, it’ll be a 36-year-old running the club.

Yes, it’s true that P.J. Phillips will become the youngest manager in the Frontier League, but he’s already built a huge
reputation among baseball insiders. The year was 2016, and the Vallejo Admirals were struggling in the independent Pacific Association. Struggling? The manager had just been fired in the middle of the season and the team was about to disband. The players packed their bags and were ready to go home. But the team’s radio announcer had an idea.

He went to a 29-year-old infielder who was an obvious clubhouse leader and suggested that he take over as manager. “I had never thought about being a manager before,” Phillips said by phone recently from his lifelong home outside of Atlanta. “We held a team meeting and the guys said they would stay if I became the manager and that was that. And it was like a lightbulb went off in my head that I could turn my career away from playing to a career as a manager.”

Instead of disbanding, the Admirals finished the season. They finished in last place, but they finished. The following year, with Phillips as manager after he retooled the roster, the team went from worst to best and beat the defending champion Sonoma Stompers for the league title. That kind of story gets around and baseball insiders all over the country noticed and determined to keep an eye on this young man who seemed to have unlimited potential to take charge of a dugout. One of those insiders was baseball lifer Bobby Jones, who was then managing the Miners and was named last month as vice president of the Jackals.

“Baseball people have been aware of him,” Jones said. “I’ve known about him for a few years, and I’ve talked to a lot of people about him. All I’ve ever heard about him were positives. Players love playing for him. He’s known as a real class act.”

Phillips continued to manage Vallejo for several more seasons before he left California for Kentucky in 2021 to manage the Lexington Legends to the championship of the independent Atlantic League, where he recently completed the 2022 season. After Carey resigned as Jackals manager and with Jones becoming the team’s V.P., Jones and Phillips talked about the opening in Paterson.

“I have nothing but respect for him,” Phillips said. “I think we speak the same language. I know we both have a passion for the game.”

As manager, Phillips inherits a Jackals team that led the league in batting and was third in home runs but finished the year in sixth place in the standings, largely due to ranking third worst in the league in pitching, with a 6.00 team ERA. He also inherits a club that, win or lose, always played hard for Carey, a popular skipper who had moved here from Illinois and the Frontier League’s Normal CornBelters for the 2018 season.

“I want players who can play with a passion and still have fun with it,” Phillips said. “I want to win, but I also want to entertain the fans and they want to see us having some fun while we’re winning.”

He knows he has to improve the Jackals’ pitching, but he also loves the thought of power hitters up and down the lineup like New Jersey had last year, with 127 home runs in 94 games. His Lexington squad led the Atlantic League last year with 193 homers in 132 games.

“He’s been an excellent player procurement guy,” Jones said. “I’m sure he’ll be able to bring in some good players. I don’t want him to change. I just want him to keep doing what he’s been doing.”

Patrick James (P.J.) Phillips began his pro career as a second-round draft choice of the Los Angeles Angels in 2005. He spent the next five years playing shortstop, second base, third base and outfield for Angels farm teams, then moved on to the Cincinnati Reds organization, playing at the Double-A and Triple-A levels in 2012.

He came east in 2013 and almost joined the Jackals but wound up signing with the Atlantic League’s Long Island Ducks, instead, where he played infield and all three outfield positions for the league champs. The following year, he jumped first to the Atlantic League’s Camden RiverSharks, then ultimately out to the west coast and the Vallejo Admirals, where he batted .300 in 2014 and .302 in 2015, becoming the player-manager in 2016 and full-time manager in 2017.

Born Sept. 23, 1986, Phillips is four months younger than Dan Schlereth, the 36-year-old manager of the Joliet Slammers. There are three 39-year-old managers in the league: Jared Lemieux of Lake Erie, Chad Rhoades of Florence, and Matt Rusch of Trois-Rivieres.

His older brother, Brandon Phillips, was drafted six years ahead of him and became a three-time National League all-star and four-time Gold Glove Award winner with the Reds during a 17-year big-league career. His younger sister, Porsha Phillips, was a star forward for the University of Georgia’s women’s basketball team where she led the SEC in rebounding before playing in the WNBA with the San Antonio Silver Stars.

The Jackals new manager says he’s eager to get to work on learning the team’s roster and trying to make improvements, especially in the pitching department. That part of his new job has already begun and will continue throughout the offseason. And, he said, he’s excited to be part of something brand new next season when the Jackals move to Paterson. He’s also looking forward to moving to New Jersey and having legit Philly cheesesteaks readily available – a luxury not so plentiful at his last stops in Kentucky or northern California.