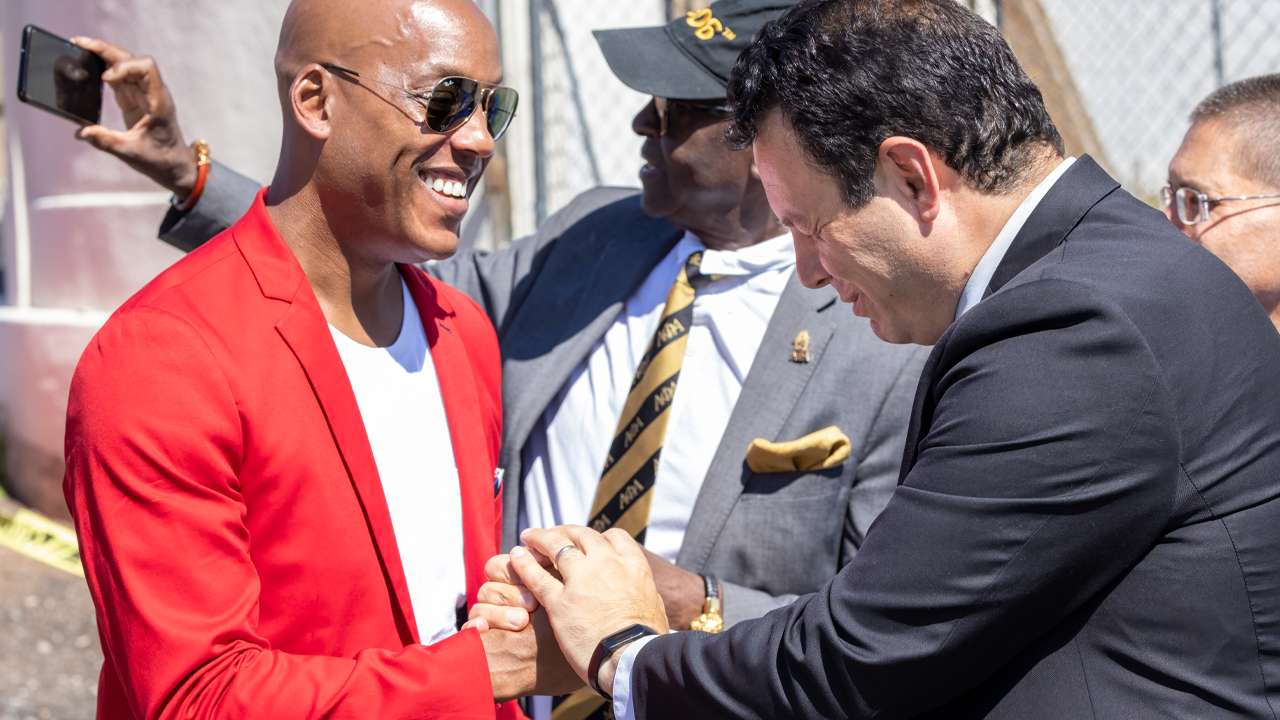 Posted at 17:25h in Jackals News by NJ Jackals
Share

When the Jackals move to Hinchliffe Stadium in Paterson for the 2023 season, it will open the door to a new chapter in the life of Bobby Jones. It will also offer him a meaningful link to the past – to both baseball history and to his own family story.

The manager of the Sussex County Miners for the past eight years, 50-year-old Jones has been named as vice president of the New Jersey Jackals, his first professional job out of uniform and out of the dugout after a pitching career that included six Major League seasons with the Rockies, Mets, Padres, and Red Sox.

When his days as a lefty starter and reliever came to an end in 2006, he stayed in uniform as a pitching coach at the amateur, then minor-league levels, including a stint with the Rockland Boulders of the Can-Am League, now the New York Boulders of the Frontier League.

From there, he became the Miners second manager in 2016, taking over a last-place team, moving up in the standings the next two years, then winning a league championship in his third year in Sussex County.

Now, it’s time for a new challenge as Jones trades in a uniform for a sports coat and front-office position that puts him clearly in charge of the Jackals future.

And his new job brings the opportunity to promote Hinchliffe Stadium’s status as a National Historic Landmark, which hosted Negro League teams in the 1930s and 1940s, while also presenting Jones with a very personal connection going back to his great-grandfather, Jack Parker, who would have visited Hinchliffe when he played Negro League ball with the Pittsburgh Crawfords and Homestead Grays.

But first things first: Jones needs to build his front office staff. “I want people who are hungry, people who have a great desire to win,” Jones said. “Moving to Hinchliffe Stadium is a new beginning for this team and I want to do everything I can to make it a winning team, and that will take people who want to win as much as I do.”

He’s looking for a Manager who’s been involved in independent baseball and knows his way around the unique demands of an independent setup like the Frontier League, which both the Jackals and the Miners joined for the 2021 season, after previously playing in the Can-Am League.  A Partner League of Major League Baseball, the Frontier League is the nation’s largest and most successful independent league, and Jones said it’s filled with individuals that he has come to know and respect for their knowledge and their leadership – people, he said, he will continue to learn from in his new position.

After a lifetime on the field, he knows the game of baseball inside and out, and Jones said he’ll now throw himself into the business side of things with the same attitude he’s displayed with the Miners, an attitude that’s impressed people in Sussex County and around the league.

“Players want to come here now and that wasn’t always the case,” said Miners general manager Justin Ferrarella, speaking at the midseason point of the 2021 schedule, when the Miners led the league with a 31-16 record and were about to hold a Bobby Jones bobblehead night.

“The word has gotten out about what Bobby has accomplished here,” Ferrarella said. “He’s created a culture that you don’t find everywhere. It’s all about winning. It’s all about everything being on a very professional level.”

In fact, the word “culture” came up often over the years when ballplayers and others talked about Jones.

“He’s put together a whole culture of how things are supposed to go for the team,” said former Miners’ shortstop Cito Culver, who’d been a first-round draft pick of the New York Yankees. “Because of Bobby, there’s a culture of winning and team chemistry.”

No doubt that development of a winning culture will continue to be a Bobby Jones trademark now that he takes over at Hinchliffe Stadium.

“It will be exciting to be there, and the fans will love it,” he said of the ballpark that first opened in 1932 and is now nearing completion of a $100 million public-private restoration.

“There’s so much history here, and now it’s going to be a gorgeous, modern stadium.”

Legendary Hall of Famers like Satchel Paige, Josh Gibson, Cool Papa Bell and Judy Johnson once played at Hinchliffe, when it was home to both the New York Black Yankees and the New York Cubans. Not to mention Jones’ great-grandfather, Jack Parker.

The Jackals will definitely honor that past in several ways, Jones said, sometimes wearing historic uniforms and retiring numbers, including that of Larry Doby, a Paterson High star who followed Jackie Robinson by three months when he became the second black player in the big leagues and the first in the American League when he joined the Cleveland Indians in 1947.

But, again, first things first. Jones has to get a team on the field. Won’t he miss being in the dugout, though? Won’t he want to make a pitching change in some seventh inning?

“I don’t know if I’m going to miss it or not,” he said. “I might be too busy learning what I’ve got to learn and being involved in all the other aspects of running a team to miss it.”

A native of Orange, N.J., Jones pitched for Rutherford High School and Chipola College, in Florida, where he was selected by the Milwaukee Brewers in the 1991 draft. He played three seasons with Milwaukee farm teams before moving to the Colorado Rockies minor-league system for two more years, then made his major league debut as a 25-year-old with Colorado in a game against the Mets – his favorite childhood team – at Shea Stadium in May 1997.

In 1998 and 1999, he made 40 starts and 25 relief appearances for the Rockies before being traded to the Mets to start the 2000 season playing for manager Bobby Valentine and teaming up with future Hall-of-Fame catcher Mike Piazza. Another teammate on the Mets was a right-handed pitcher also named Bobby Jones. The new Jackals vice president was traded to the San Diego Padres in 2002 and, by wild coincidence, again became a teammate of that other Bobby Jones, who’d joined the Pads as a free agent in 2001.